The most ancient part of Torre Bertona consists in a tower, dating back to the 13° century.
Towards the end of the 15° century, a nobleman from Todi (Roberto degli Oddi), mentioned in documents dated 1498, which is probably the year of his wedding, decided to enlarge a fortified structure belonging to his family for a long time. 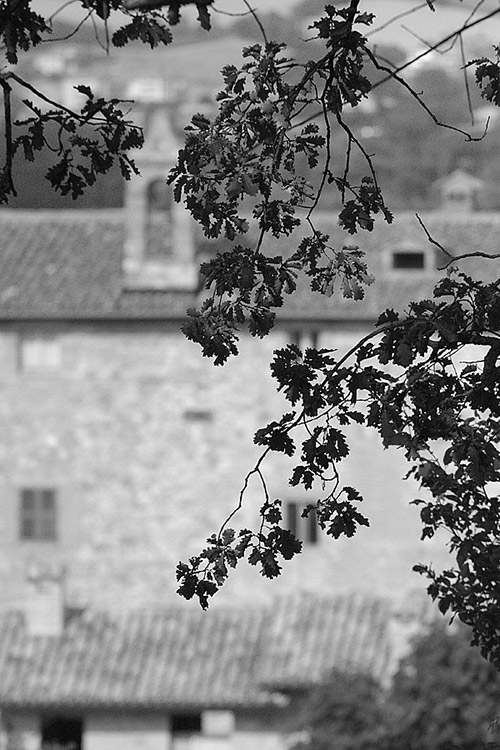 The structure was part of a countryside estate, few kilometers from the city's protecting walls and located on a hill overlooking the sinuous riverbed of the Tiber, down in the valley. There, for centuries, could be found a tower, one of the many structures constructed to guard the road that connected the town to the territory of Orvieto.
The land was fertile and well ventilated, surrounded by cultivated fields, vineyards and olive tree groves. Roberto, also called Robertone perhaps because of his strong build, constructed for him and his family a house simple, in strict renaissance style and leaning against the thick walls of the tower.

From the 16° century, the tower takes the name “Torre Bertona” from its owner and the house is classified as “Holiday Resort” in the city's register.

In 1522 Robertone's daughter, Austeria, is granted part of the tower as dowry at the occasion of her wedding to Paolo Pietro Leoncini, member of another noble family of Todi. Of their union are born numerous children. The boys will be named after archangels.

In the 17° century, the ownership of the tower is transferred from the Leoncini family to the Alvi family, at the time of the wedding of Crispolta with Giovan Battista Alvi. Their wedding, from which was born a baby called Pirro, is tragically interrupted in 1643 with the death on the battlefield of the young husband who was the ensign bearer for Pope Urbano VIII. The structure and the land surrounding will remain the property of the Alvi family until the beginning of the 20° century.

Torre Bertona retains the gracious nobility of a countryside getaway just outside of Todi's impressive city walls, in an environment that mixes the quiet pace of a land inhabited for two thousand years with the serenity of a small and peaceful place.

The white unpaved road ends on the little square of the hamlet, squeezed between the staircase of the tower,  leading to the door of a tiny 16° century chapel, and a long-shaped farmhouse. From there, the unpaved road  turns into a track and ascends among the oak and olive trees towards a woody hill populated with numerous and shy animals.

The house in which Austeria, Crispolta, Pirro and the boys named after archangels used to spend the hot summer days during the harvest seasons, dominates from high up the valley and the surrounding hills, in a relaxed and sunny atmosphere. All around, there can be found not lonely and large stretches of abandoned land but rather a highly civilized rural area typical of Umbria and Tuscany, which still shows signs of their thousand years old industriousness as well as the still visible traces of the roman landscape model. As in the past, the town is yet a place with intense social and cultural life, within easy reach in a short time – in the distant past, one hour on horseback; today, in few minutes we find ourselves in Todi's magnificent square.

The holiday house of Robertone degli Oddi is now subdivided in three apartments, each of them having a distinctive character. The whole structure has been meticulously restored, in strict accordance with the previous alterations over the centuries.

We wanted to preserve the marks of the passage of time but, above all, to capture the spirit of the place.

...And we hope to have succeeded 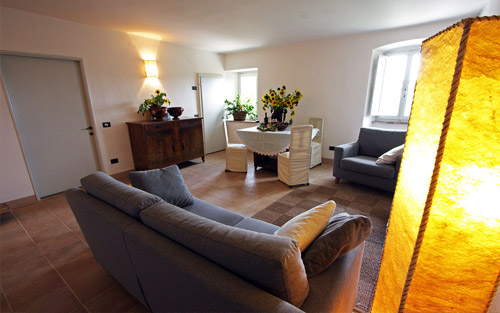 Ariel is the largest vacation apartment, situated on the highest floor of the building and from which one can enjoy the splendid panorama of Todi as well as the countryside at the opposite end. 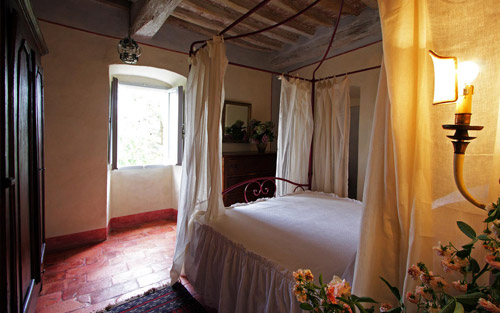 In this vacation apartment, the restored stone moldings from the original construction, as well as the remaining traces of the primitive murals, are testimonies of a long home life use. 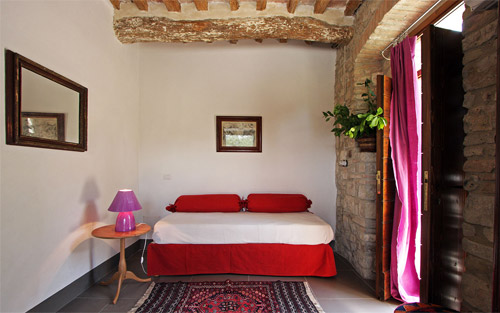 In this elegant self catering apartment, the impressive antique beams blend harmoniously with the elegant floor made of large grey slabs.

Torre Bertona overlooks the splendid view of Todi, which is found at only three kilometers away on the hill just in front.

Todi is an authentic and fascinating town that rightly benefits from a great fame as a touristic landmark, interesting to explore in its meandering underground of the Roman period as well as because of the elegant grace of its steep medieval roads.

would you like to spend a holiday in Umbria?